My first post using Hugo so this is the HelloWorld moment!

I’ve been a developer for over 20 years… it’s hard to say and even harder for me to believe. Not only am I getting old but when you launch your first website when your 15 that 20-year mark creeps up mighty quickly.

I think I’m going to like it here. But in the meantime, you can find me at gogorichie.com been there since 2002

2019 was a big year for me using VS Code before the beginning of the year I was still using Notepad++ along with Visual Studio as my daily IDE’s. But in January I tried to use VS Code every day for 30 days and I haven’t stopped and along the way, I also convinced a few of my Co-workers to convert over as well. I remember reading the 2018 Stack Overflow release their annual Developer survey results last December, one of the interesting things that I noticed was that VS Code had risen to the top as the Most Popular Development Environment among Developers and Admins with 35% of 75,398 respondents claiming to use it which is pretty cool for a tool-less than 5 years old. What makes VS Code so popular is first it’s platform agnostic, then the design is clean simple and how easy it is to create and add an extension to the marketplace. That means depending on the type of task programming or administration you want to do at that time VS Code can help you accomplish it. Ok so here are some of my favorite plugins I use.

First, let’s talk about themes this is one of those things that makes VS Code different most of the other tools out there.

The second week of October annually is Jaycee Week, it’s the week where we as Jaycees celebrate the founding of our organization in 1915 by Henry Giessenbier Jr. Ironically this month marks my 14th year as a member. So what better time of the year than now to share with you why I Jaycee? I joined the Jaycees to help make my community a better place. But I stay a Jaycee because it gives me the opportunity to be a Young Active Citizen, who can create positive change within my community. What’s the difference? Well making my community a better place is about helping my fellow-man or women with their need and creating positive change in my community is about fixing the root cause that is causing hardship to my fellow-man or women. This is one of the most important things the Jaycees have taught me and have given me the ability to do. Most of the time people tackle problems with a one-time donation or one day of volunteer work, but as Jaycees, we focus on making a sustainable impact.

Second I Jaycee till this day because it gives me the better opportunity to be a better leader. Since I was Chapter President back in 2005 each year as a member I’ve become a better leader and In 2016 I served as the leader of the Illinois Jaycees, the largest Jaycee membership state in the nation. Being an effective leader is a universal skill and not everyone can master but the Jaycee organization gives me the opportunity to be a great one and these skills are applicable outside the organization. John F. Kennedy credited the Junior Chamber with providing his ‘informal’ education, which he considered equally important as his Harvard ‘formal’ education.

Finally, I Jaycee because it gives me the opportunity to meet amazing people and see new amazing places around the world. In this great organization, I had the ability to meet some really awesome people, make some amazing lifelong friends, and meet my wife. 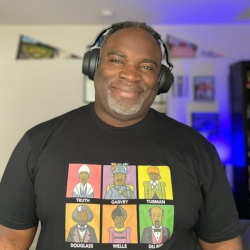 Been hacking hardware and code since ‘95. Set my 1st PC on fire at 8 got my A+ Cert at 15. I’m a Dev, BA, DBA, SysAdmin, TV Producer, Community Organizer & Motivational Speaker some days of the week. Read more…...